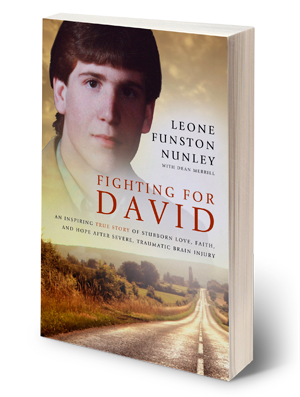 
After a motorcycle accident left 21-year-old David McRae severely brain damaged, doctors declared him to be in a persistent vegetative state and recommended that his family discontinue his feeding and hydration.

David’s mother, Leone Nunley, had other ideas. She fought to ensure that her son’s seemingly hopeless situation would end in victory.

Fighting for David details the inspiring story of boundless love, stubborn faith, and indomitable hope. Determined to restore David to the highest level of function possible, Leone recounts her interactions, both positive and negative, with medical professionals and insurance carriers as she and her family fought to keep David alive, and later, to provide him therapies to stimulate his damaged brain to recover at least some of its function.

David’s story ends in hope and triumph over adversity. David’s recovery has exceeded all medical expectations. David can now speak, feed and dress himself, and walk with the aid of a walker. He also lives on his own in a duplex with a caregiver. David’s faith and love for his family and friends is apparent to all who meet him. 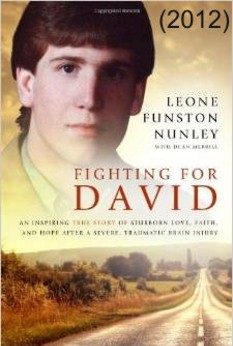 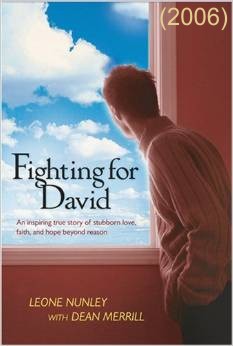 Special - Purchase a signed copy of "Fighting for David" for just $14.99 plus shipping. Simply send an email to me. (See the Contact Us page.)

In loving memory and tribute of our brave American Heroes, all the proceeds including the printing costs will go to Walter Reed Army Medical Center, WWProject, and other Veterans facilities. Many of them have given their arms, legs, and brains to help our nation stay free. One soldier l heard of, lost both arms and both legs, and some have paid the ultimate price.

When the President of Afaganstan, visited Walter Reed Army Medical Center 5/10 He met the soldier who had lost all of his extremites, and was very moved to see the sacrifices he and so many have made to help his country. Later in the day, at a press conference with President Obama, he talked about this young soldier. Undoubtably other countries around the world heard of this American Hero and all he had sacrificed in the name of freedom.

You might say I come from a military family, myself, who believes in fighting for what is right, and Fighting for David was the right thing to do.

For all you History Buffs out there, you might enjoy reading about Major General Frederick Funston, from the state of Kansas. He was my grandfather's brother.

Leone Funston Nunley is a retired interior designer from Yakima, Washington. She and her husband, Dale, are the parents of seven sons.

Since 2001, Leone’s son, David McRae – who suffered a severe head injury during a 1989 motorcycle accident – has lived near her in his own duplex with a caretaker.

Leone attends West Side Baptist Church, where she is involved in children’s ministries. She has been an active participant in Bible Study Fellowship since 1991.